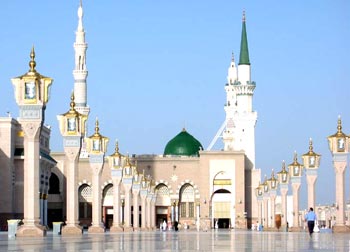 Milad-un-Nabi celebrations were held in Oldham, under the banner of Muslim Youth League UK – Sisters on 1st March 2009 at Madina Islamic Centre, Coppice.

The event was primarily aimed at the English speaking Muslim youth and all speeches were conducted in the English language.

Stage secretary, Mrs Jabeen Ali, Human Resources Secretary MYL UK - Sisters, highlighted the importance of holding events of this nature, emphasising that the love of the Holy Prophet (SAW) is the soul of Iman, therefore by holding Milad-un-Nabi gatherings it allows one to rekindle the love for the blessed Prophet (SAW). She also touched on the topic of sending salutations on the Holy Prophet (SAW) and the great reward in performing this act, which is itself done by Allah (SWT).

During the course of the event there was beautiful nasheed recitations from a number of sisters, including girls under the age of eight. It takes a lot of courage and confidence to stand in front of such a large audience and they performed brilliantly.

Sister Saeeda Bano, from Oldham, conducted the main speech and spoke about the importance of displaying good Islamic character and using this time in Rabbi-ul-Awaal to change our lives for the better, by the way we behave and act.

The guest nasheed group was from Manchester and led by Mrs Gulfarm Qadri. Their nasheeds got all the audience involved and it really lifted the spirit of the gathering, with such love shown for the Holy Prophet (SAW).

Mrs Shameem Butt, from Manchester, spoke about her experiences and how she turned her life around and became a practising Muslim. This change came about when she was introduced to the personality of Shaykh-ul-Islam Dr Muhammad Tahir-ul-Qadri. She spoke about how this gave her the opportunity to reassess her life and move forward in a positive way. She went on to introduce Minhaj-ul-Quran to the audience and touch upon the basic aims of this organisation.

Mrs Jabeen Ali then went on to introduce the audience to Muslim Youth League UK - Sisters.

As this was a rare event solely in the English language it was greatly appreciated by the youth who desperately seek such lectures in English so that they can gain knowledge about evidence on celebrating Milad – un – Nabi according to Quran, Hadith and classical Imams.

Organizing such an event, with the audience in excess of 200 people requires much preparations and several sisters worked constantly to pull it off. It included the efforts of sister Tayyiba Ali and Sumiya Ali and the sisters from the local Dhikr group.