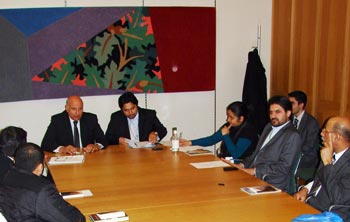 In London’s centre of politics Sahibzada Hussain Mohi-ud-Din al-Qadri told MPs: “I would like to present an accurate image of Islam which is often misrepresented by people.” He further told leading politicians: “Islam stands for peace, security and excellence. Dr Qadri and Minhaj ul Quran is representing this today”. Sahibzada Hussain defined the very foundations and principles of Islamic law are based on avoidance of hardship and easing of difficulty. He added Islam is not about killing people and creating hardships. Sahibzada Hussain said: “There is no compulsion in Islam, there are no hardships it’s all in the law of Islam. It’s not something I am making up in order to better the image of Islam” 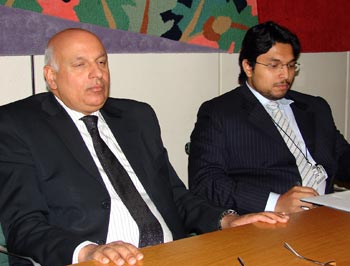 Whatever is presented today in relation to Islam is completely false Sahibzada Hussain said: “How can such religion ask to destroy and kill people when the Prophet Muhammad – the torchbearer of peace explicitly prohibited the killing of children and women during armed combat”

In a message of harmony Sahibzada Hussain said: “Muslim society is not a isolated society but a integrated community. It does not matter whether your neighbour is a non-Muslim the first share should go to him. A short minority misrepresented Islam. We need love, we need to love things, even love animals they are all living things. Those who promote extremism have nothing to do with Islam. Love eliminates hatred and extremism. Anger and jealousy should be taken away through the seed of love. No narrow thinking –which Islam hates and forbids it in the strictest terms.

Sahibzada Hussain told listeners destroying schools – institutions of learning is not part of Islam. Freeing and educating a concubine or people earned a huge reward in Islam. In Prophet Muhammad’s era prisoners if they educated children they were released from imprisonment. 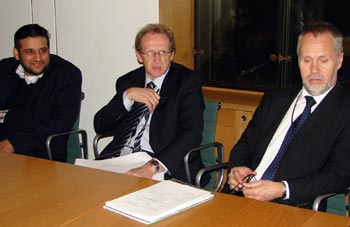 Speaking about the life and mission of the founder of Minhaj ul Quran International organisation Sahibzada Hussain said: “We have taken the same path Dr Qadri has taken. He has taken his life to spread harmony and peace between people, countries, communities and faiths. We need a peaceful mission for our future generations.”

Sahibzada Hussain said: “No one calls the Tamil tigers in Sri Lanka terrorists. No one calls the Jewish and Christian elements of violence Jewish or Christian Terrorists. If you highlight an individual who does not represent us (Muslims) helps that one individual and not the entire Muslim community.” Dr Qadri has taken an open and blunt stand against the perpetrators of the 9/11 acts. Dr Qadri is the author of articles published in the international press on Islam and Peace and the most misunderstood Concept of Jihad. Sahibzada Hussain Muhiduddin al-Qadri is the son of the foremost living authority of Islam – Shaykh ul Islam Dr Muhammad Tahir ul Qadri. 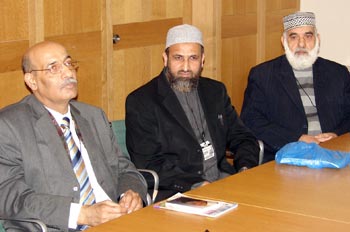 Sahibzada Hussain in his speech said terrorists are using children for their ignorant activities and dirty work. 750 million US dollars been spent on the war in Afghanistan. The 750 million dollars should have been spent on building institutions of learning – schools, colleges and universities “If you make their life beautiful then they will love you. They say life is not good its not worth living so they resort to suicide and killing themselves. Extremism originates from poverty. When they have a beautiful future they will not desire to die. I would like to convey this message in the corridors of power in the House of Commons” said Sahibzada Hussain.

Sahibzada Hussain sent a very strong message to key policy and lawmakers. His well received message echoed in the corridors of the House of Commons. Glasgow Constituency MP Mohammed Sarwar said: “I wish that Hussain’s voice is heard and I am sure it will be heard.” MP Sarwar also said: “I know Hussain’s father Dr Tahir ul Qadri- a scholar of immense repute and stature.” He also added: “I have heard Hussain speak about Islam he is a very great speaker whom I have been inspired by.” This brought the great Sahibzada Hussain’s visit to the UK’s House of Commons. 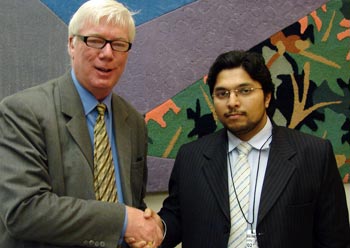