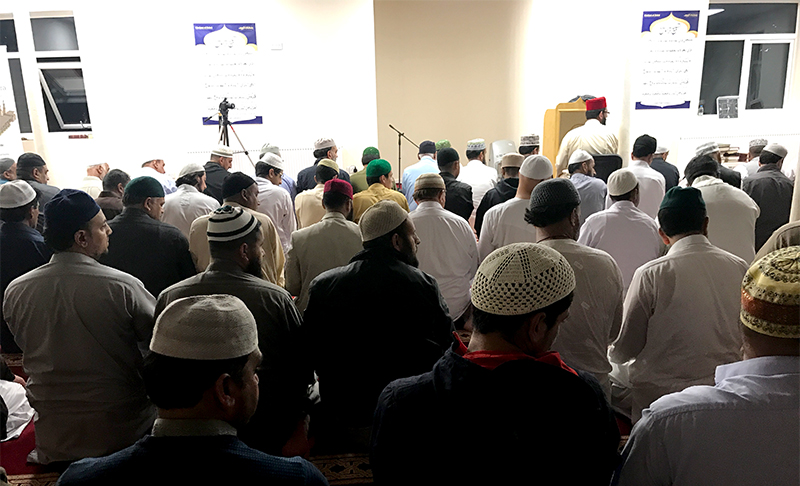 A spiritual gathering was organised by Madinat-al-Zahra on Laylat-ul-Qadr also known as the Night of Power on Wednesday 21st June 2017. It is night in which the Holy Qur’an was revealed from the Throne of Allah Subhanahu Wa Ta’ala, by the Archangel Sayyiduna Jibra’il Alayh-is-Salam transcending the heavens and unto the blessed heart of the jewel of creation our Master Sayyiduna Muhammad (peace and blessings be upon him).

In celebration of this blessed miracle, and in accordance with tradition, the recitation of the Holy Qur’an was completed during Salat-ul-Taraweeh. Thereafter, the Huffadh who had dedicated their whole month to this tradition, were presented with gifts and the attendees expressed their appreciation. The night also involved further recitation of the Qur’an by various Qurrahs and Naat Khwaans singing the praise of Sayyiduna Muhammad (peace and blessings be upon him).

Allama Muhammad Afzal Saeedi, the director of Madinat-al-Zahra, delivered an address concerning the importance and magnitude of this night. The gathering was reminded that the time spent in the remembrance of Allah Subhanahu Wa Ta’ala and his Beloved Prophet (peace and blessings be upon him) in these auspicious hours of darkness was better than 83 years of worship.

Allama Muhammad Afzal Saeedi also spoke on the Mercy of Allah Subhanahu Wa Ta’ala and how repentance was the key to one’s salvation. This is irrespective of whatever malady one is afflicted with, be it spiritual, financial, physical or otherwise.

The night was concluded with Dhikr and final Du’a where the gathering prayed to their Lord to forgive their shortcomings and remove the suffering of the entire Muslim Ummah. A special Du’a was also made for Madinat al Zahra in propagating the true message of Islam and to give all committee members, donors, volunteers and service users the strength to play an enthusiastic role in its success.