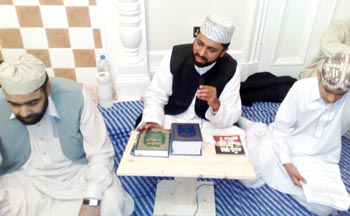 On 26th September Laylat-ul-Qadr (Night of Power) was commemorated at the MQI Glasgow under the guidance of Allama Shahid Baber. It was the first time the Tarawih Prayer was lead in the MQI Glasgow and the complete Qur'an was recited by Hafiz Muhammad Siddiqi in his unique voice. Hafiz Muhammad Siddiqi was gifted some selected books of Hazoor Sayyadi Shaykh-ul-Islam Prof. Dr Muhammad Tahir-ul-Qadri for his great effort by the Al-Haaj Abdul Wahid Raza Sahib (President of Minhaj ul Qur’an International (Glasgow)).

The gathering commenced with the recitation of the Holy Qur’an by some distinct students studying at MQI Glasgow, who showed their exquisite talent and qualities in the recitation of the Holy Qur’an. As the sound of the Qur’an penetrated the hearts of the participants, the power of these phrases captured the souls and the minds which resulted in the formation of a spiritual atmosphere. Among the recites was Harroun Nakkash, who recited Surah Al-Rahman, Madni Ahmed Tahir who recited Surah Lam Yakun, Sufiyan Khalid who recited Surah Wassama ut-Tariq, Tanveer Ahmed who finally recited Surah Amma Yatasa’loon. This reflected upon the great effort exerted in teaching and training the students of MQI Glasgow. 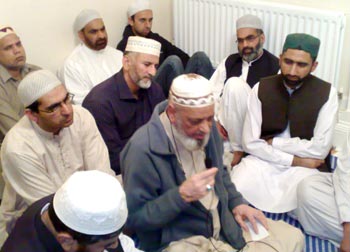 After the recitation, Allama Shahid Baber discussed the importance of reciting the Holy Qur’an, and what should be the spiritual condition of the reciter and the listener. He quoted one of the sayings of Imam Ghazali (May Allah be pleased with him) who said, “Weeping is recommended while reciting (the Qur’an) or witnessing (its recitation).” He said, “The way to achieve this is by bringing sadness to mind by reflecting upon the threats and warnings, the covenants and agreements that it contains, and then contemplating one’s shortcomings, with their regard. If this does not bring sadness and weeping as it does with elite worshippers then one should weep from the lack of it, since it is among the greatest of calamities.” This saying should encourage ourself to reflect upon what we are doing with this life, are we taking the accountability of our self? Is he spending time in the remembrance of Almighty Allah? etc.

A short talked on the virtues of Laylat-ul-Qadr was delivered by Junaid Ahmed who is one of the students of MQI Glasgow studying under Allama Shahid Baber.

Allama Shahid Baber also explained the importance of recitation of Greetings and Salutations upon the Holy Prophet (Peace be upon Him), he mentioned that this is the only act where Almighty Allah participates with His creation and quoted the verse of the Holy Qur’an. Another point to which attention was drawn to was that, in order to establish a spiritual link with the Holy Prophet (Peace be upon Him), one should recite Salat-o-Slam upon him in abundance. 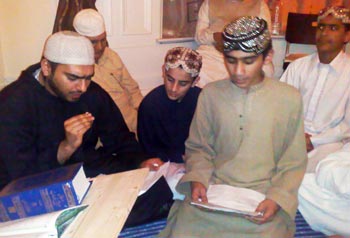 He further elaborated the point that this link will assist one to gain salvation in this world and the world hereafter. After the word of advice collective greetings and salutations were recited upon the Holy Prophet (Peace be upon Him) under the leadership of Minhaj Naat Counsel, which further enlightened the gathering and contributed to the spiritual inspiration. Among the other Nasheed artists were Wasif Ali Shah, Muhammad Khaliq and Munir Ahmed, who in their own distinctive style articulated the love of Holy Prophet (Peace be upon Him). The guest Nasheed artist was Muhammad Waheed Raza (Elder Brother of world renown Nasheed Artist Muhammad Milad Raza Qadri) who recited the very famous poem of Shaykh Saa’di Sherazi (May Allah be pleased with him) which took the souls and the minds of the participants in the vicinity of Madinat-ul-Munawwirah. The hearts yearned for the love of Holy Prophet (Peace be upon Him) and the eyes filled with tears, giving a whole new dimension to the spiritual atmosphere.

After the completion of the nasheed Allama Shahid Baber commented upon a couplet recited by Brother Muhammad Waheed Raza, elaborating that Almighty Allah prescribed a method in which forgiveness should be sought from Him. He Quoted the Verse of Surah an-Nisa (4:64) and elaborated that, even one cannot achieve the forgiveness from Almighty Allah except through the intermediation of Holy Prophet (Peace be upon Him).

Finally a short break was taken and refreshments were served before the saltus-tasbih prayer. The gathering was concluded by collective Zikr and Dua which brought the sermony to its climax. 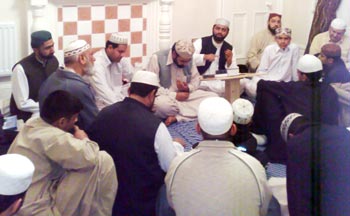 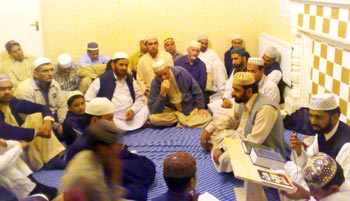 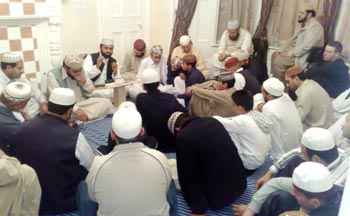 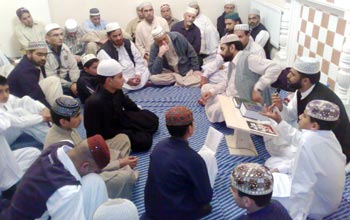