After a public absence of seven years, the city of Rotterdam (the Netherlands) saw once again the Milaad of the Prophet (saw) being celebrated. In the beautifully decorated hall of the ‘Theater Zuidplein’, approximately 400 youth gathered to enjoy the Milaad Festival 2008. The previous Milaad Festivals were held in 2000 and 2001 and saw at that time a huge and unprecedented gathering of 1800 youth at the main city hall.

The Milaad Festival 2008 ( www.milaadfestival.nl/2008/ ) was organized by Al Hidayah NL, which is the local branch of the youth of Minhaj-ul-Quran Holland. A regular group of members gather on a weekly basis to study Irfan-ul-Quran and Minhaj-us-Sawiyy. Every once in a while, Shaykh Ramadan al-Qadri and Shaykh Sohail Siddiqui are invited to come over from UK and deliver their lectures and tarbiyyah.

The opening of this event was done with the recitation of the holy Quran by brother Zieshaan Chauhan. The participants were welcomed by brother Tasneem Sadiq who elaborated on the two ways of getting spiritually connected with the Prophet (saw): (1) through serving and observing the Heirs of the Prophet (saw) - the Ulama, and (2) through listening and enjoying the naat and nasheed (poetic expressions) about the Holy Prophet. As it turned out, both of these were abundantly present during the whole event!

The event was masterly hosted by Sayyid Ghulam Jilani.

The next guest, Dr. Irfan Alawi, presented a beautiful slideshow about the two Holy Sanctuaries, Makkah and Madinah. He pointed out the locations of various historical places and the graves of the pious family and lovers of the Holy Prophet (saw) and told the audience about the lack of care for these relics. The audience was shocked to hear in what extent these relics had already been lost to history. The only thing that reminded of many of these sacred places, were these pictures which were being shown.


After this slide-show, a heartwarming lecture was delivered by the respected and honored Shaykh Ramadan al-Qadri. Being a student of Sayyidi Shaykh-ul-Islam dr. Tahir-ul-Qadri, he is doing a superb job with the youth in Europe. He is currently the director of al-Farghana institute and concentrates on bringing classical education to the youth. His lecture focused on ‘Love of the Prophet (saw) for the Ummah’. He said: ‘In Hinduism, Judaism and partly in Christianity, the cow is sacred. In Islam it is sacrificial. That is why the Islam is always sacrificed in the media.’ This made the participant laugh a lot. He dwelled on the concept of love and gave many examples of how the Prophet (saw) was compassionate and loving, even when his enemies were harsh to him.

The companions were very confused and asked him (saw) about all this. He (saw) replied that he was a mirror. And anyone looking in the mirror, will only see himself reflected! So whenever the Prophet (saw) is attacked, know that this is nothing than their own ugliness and negativity reflected! He further stressed to become good Muslims and reflect the true teachings of Islam in themselves.

LAUGHTER IS SUNSHINE
As an enlightening touch, Mohammed Amer was invited to take the stage. He is a humorous person and is part of the ‘Allah Made me Funny’ group. They bring the essence of Islam to the public by using the means of humor, often touching on sensitive subjects in order to have people realize the tension between Islam and their
non-Islamic behavior. In his show of about 20 minutes he made everyone laugh and become lighthearted.

After a short break for prayers, refreshments and a small Islamic art gallery, the participants were again invited to take their seats for the second part of the event.


The next speaker was invited to take the stage: Shaykh Babikir Ahmad Babikir. He is the director of the ‘Islamia schools’ in the UK and a student of the erudite scholar Shaykh Fatih Qaribullah. Shaykh Babikir was also present at the huge Milaad gathering a few years back in Lahore (Pakistan) and is known for his love towards sayyidi Shaykh-ul-Islam. He spoke on the subject of ‘Love of the Ummah for the Prophet (saw)’. Everyone was forced to critically ponder on their origins when he said: ‘I love the group called 'Friends of the earth' and 'Greenpeace'...I advice you become friends with them! Because you are also created from the soil of the earth." He stressed never to judge anyone on the basis of their appearance. Because this will be arrogance and nothing but a reflection of Satan when he refused to bow for Adam (as) when Allah (swt) commanded him to do so. "Don't ever think he/she is not a muslim so I will go to heaven and he/she to hell! Who are you to judge?!" 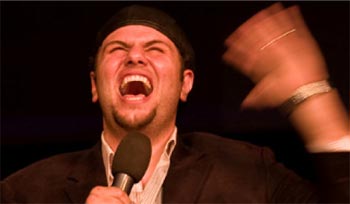 The last part of this event was totally dedicated to the beautiful art of Nasheed/ Na’at. The group ‘SHAAM’ from the UK were present and sang the praises of the Holy Prophet (saw) in the most beautiful and eloquent manner. With their angelic voices they mesmerized the public and sang classical as well as contemporary poetry in Arabic, Urdu and English. The pinnacle of the evening was their recital of ‘Mercy Like the Rain’ with all the guests and organizers together on the stage. The evening was concluded with a short but powerful Hadrah dhikr led by Shaykh Babikir. He advised the gathering to always be with Allah (swt) and feel His presence and Omnipotence everywhere. 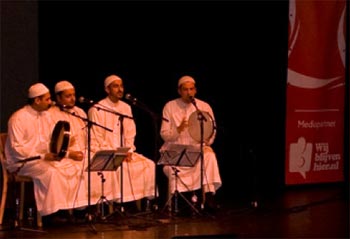 The participants of this event were of a diverse array of nationalities, Muslim and non-Muslim alike. Local scholars and dignitaries were also present, amongst them Qari Muhammad Zubair Qadri and Allama Ahmad Raza Naqshbandi, both Minhajians. The president of Minhaj-ul-Quran International, the Hague, Haji Maqsood Butt also attended this event.

With a concluding du’a, this evening of praises and Milaad came to an end, once again leaving behind sweet memories which will be kept for a long time to come.

As the organizing committee, we once again felt the indescribable blessings of sayyidi Shaykh-ul-Islam and Minhaj-ul-Quran and are very thankful to Almighty Allah (swt) for having chosen us to serve this tahreek and mission. May He accept these small offerings, bi jahi Sayyidil Mursalin. 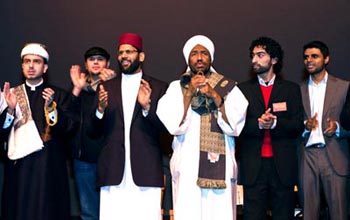 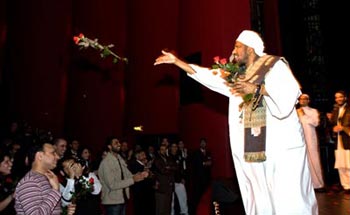 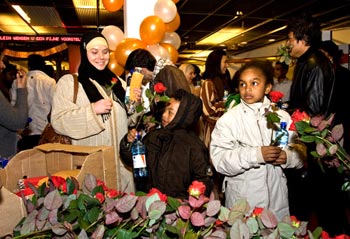 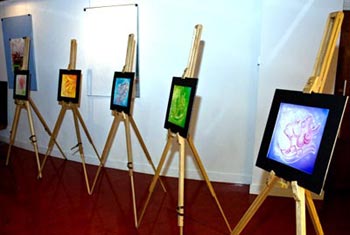 Islamic Art Gallery during the break 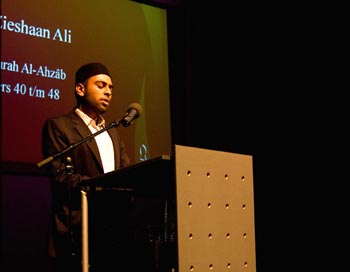 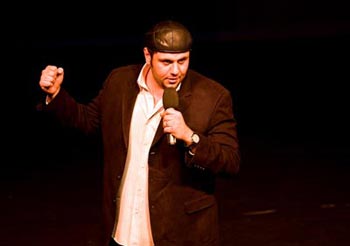 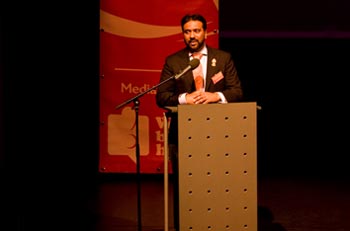