We are all thankful to Allah Almighty Who enabled the Minhaj Women League and Sisters League to celebrate such a marvelous program on the occasion of Isra wal Me’raj on the 26th of May 2013. Alhumdulilah many sisters attended the program to enlighten their hearts with the remembrance of Allah Subhana wa Ta`ala and His Beloved Prophet (Peace be upon him). 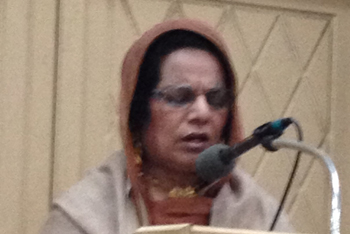 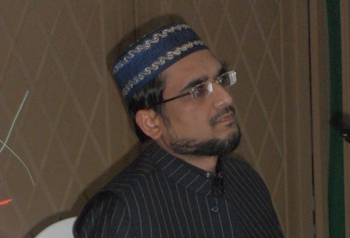 The two sisters presenting the program were Mrs Nazia Adnan and Henna Qazi. They first welcomed the audience for leaving their houses and all their worldly affairs to be together in His remembrance. The Mehfil started with the recitation of the Holy Quran by Sister Amna Shakeel followed by a recitation by Sister Farkhanda Altaf. Then Ms Sitara Malik, Ms Khadija Usman, Mrs Naseem, sisters Wafia & Rabia, our little sister Savera, Mrs Iram Dastagir and sisters Kanwal & Saba had the honour of sending greetings and salutations on the Holy Prophet (SAW). During the program a short clip of Shaykh ul Islam’s speech was presented on projector on the topic of Isra wal Me’raj. Reorganization of MWF took place a few weeks ago. Mrs Nazia Adnan introduced the new members as follows:

Mrs Sadia Usman – Deputy General Secretary Mrs Humaira Shakeel – Financial Secretary Ms Sumaira Ghos – Deputy Financial Secretary Mrs Uzma Sahil – Communication Secretary Mrs Sabba Kashif – Deputy Communication Secretary. Then Mrs Arooj Fatima Qazi was invited on the stage. In her talk she thanked all the Women League chapters for working tirelessly from the 1990s to spread the activities and message of Minhaj ul Quran and its founder Shaykh ul Islam Professor Dr Muhammad Tahir ul Qadri. She emphasized the fact that all the help and guidance of senior members was needed. She assured that the new chapter will perform to the best of its ability to experiment new ideas and organize events in an atmosphere of cooperation and unity. 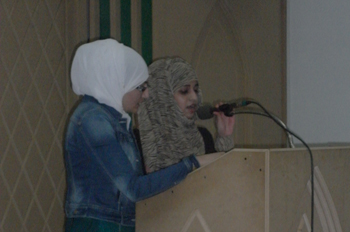 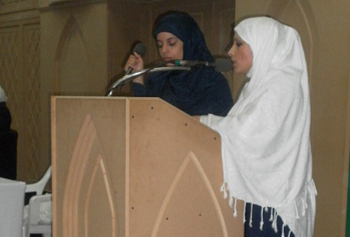 During the program a Talk Show was also organised. The host was Sister Maheen Iqbal and the guests were Mrs Zahida Azhar (Student from Minhaj University – Lahore) and Mrs Zarina Abu Bakr (Student of ICIS). During the show which was presented in different sessions, Sister Maheen asked guests the questions regarding Me’raj un Nabi, its importance and the message of Isra wal Me’raj. Sister Zahida replied in Urdu language and Sister Zarina in French language. Next, Mrs Humaira Shakeel gave a brief presentation on Minhaj Welfare Foundation’s activities. Also a short clip was presented on the occasion.

Afterwards, Allama Hafiz Iqbal Azam delivered a speech on the event of Isra wal Me’raj. He explained how everything happened during the night of the event. He drew attention to the fact that during this journey The Hell as well as The Heaven were shown to the Holy Prophet (peace be upon him) so that he can warn his Umma about what is expected if their deeds are not good. Besides this, Allama Sahib highlighted the love of Allah Almighty for the Holy Prophet (SAW). When Allah ordered 50 prayers daily but after The Prophet (peace be upon him) requests’, they were decreased to 5 prayers daily which will be rewarded as 50 prayers. Allah is the Most Merciful. The program ended by the recitation of Salutations on Holy Prophet (Peace be Upon Him) and prayers. Refreshment was served to the participants.