The second weekend of the Muslim Youth League UK – Sisters Executive tour kicked off in Bradford on the 17th of March 2012. The tour which is aimed at raising awareness, building relations and recruiting new members commenced in Glasgow the previous week. Under the leadership of the local coordinator, Mariya Qadri, the Bradford MYL-S team made all the necessary arrangements at the Minhaj-ul-Quran Centre on Manningham Lane in Bradford. 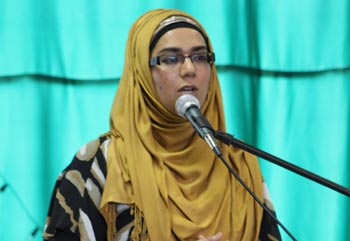 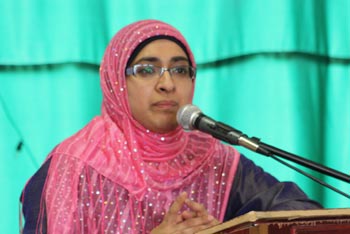 Alhamdullilah there were approximately seventy attendees, many of whom were introduced to MYL-S for the first time. The president of Minhaj-ul-Quran Women's League Bradford, Mrs JannatElahi, was also present, along with other representatives from the Women’s League. Present on the MYL-S Executive panel there were Ambreen Mehmood (President), Sweba Majid Khan (Vice President), Somia Zaman (Human Resources), Fathema Khan (Finance), and Marinah Syed Shah (Public Relations). Sweba welcomed everybody to the event and thanked the representatives of the Women’s League for participating in the event. She then invited IfraKauser on the stage to commence the program with recitation of Surah ad-Duha. Sweba advised the audience to listen to the recitation attentively as is commanded by Allah SWT in Surah al-Ara’af so that Allah’s Mercy may be bestowed upon them. The recitation of the Quran was followed by a beautiful nasheed performance by RehanaIlyas and Maliha. After giving a brief overview of the day, Sweba moved on to give a brief introduction of Minhaj-ul-Quran, and explained that MYL UK-S was restructured in 2008 by his eminence Shaykh-ul-Islam Dr Muhammad Tahir-ul-Qadri. Sweba then invited President Ambreen Mehmood onto the stage. 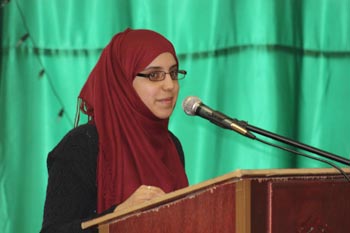 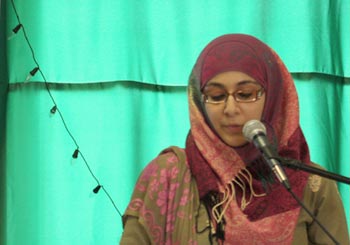 Ambreen spoke about what MYLUK-S has been doing since 2008: she mentioned the achievements; training sessions; compilation of literature; distribution of literature; and much more. She focussed her review on the ABSTRACTS project, explaining that it is a leaflet project which has been translated into Norwegian and Urdu already. She explained how this project, that started as a mere idea, has now become a global phenomenon with Holland and France interested in translating it to their respective languages and orders coming in from India as well. Marinah then took to the stage and spoke about the importance of Public Relations and gave up-to-date facts and figures about MYLUK-S online presence. Showing the global reach MYLUK-S pages and posts, she emphasized the importance of communication as it is via communication the world gets to know what’s happening in each individual area. She explained that there is an MYL website already, however, it has been dormant and that it will be one of the aims of MYLUK-S to get this website fully active by the end of 2012 insha’Allah. 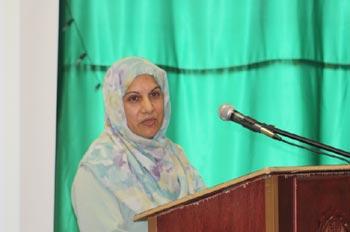 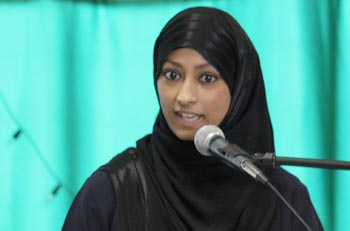 Fatema then spoke about the finances of MYLUK-S and explained that a small contribution can go a long way and that in order for any organization to survive it required long term finances. She encouraged people to join the £1 scheme that she had launched in 2011 so that they can benefit from the reward of spreading the knowledge of Deen via the various MYLUK-S projects. The audience were then split into groups for a discussion led by each member of the executive: the attendees were asked their opinions as to what types of projects should be undertaken by MYLUK-S; what fundraising ideas they could come up with; what marketing initiatives should be undertaken. These ideas were noted down by the executives with the promise to review the feasibility of each idea and to insha’Allah implement any viable ideas in the near future. Alhamdulilah there was a strong desire in the groups to attend various MQI events in other cities and countries. Some of the younger sisters were very passionate and wanted to see a global TV domination from the MYL Sisters and requested us to start with Disney Channel. 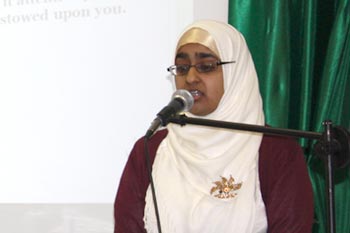 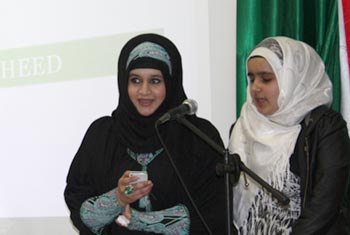 After the interactive session, Somia spoke about how she has been developing the MYLUK-S member’s database and the importance of ensuring that members have given their up-to-date details. She explained how she has been working on getting regular mailings out and spoke about the new text service she has started after acquiring our own MYL UK Sisters phone. She then went on to explain the vacancies that MYLUK-S had and how the attendees could apply for these. Somia was followed by Sweba’s motivational speech about Da’wah and why one should join MYLUK-S. She explained that according to Surah an-Nahl propagation is incumbent upon everyone regardless of gender, age, race or background, therefore, the invitation to join an organization that was propagating the Deen of the Holy Prophet (SAW) was in actual fact fulfilling Allah (SWT) command in the aforementioned verse. Sweba explained that the concept of working collectively was recommended by the Holy Prophet (SAW) and it has countless benefits. She explained that a brick on its own cannot protect you from anything, however, when several bricks are cemented together to form walls and a roof then that can protect you from the outside elements and provide you warmth. She stated that individually we may not be able to do much but as a team we can achieve so much. She requested the audience to show gratitude to Allah (SWT), for bestowing them with Iman, by joining hands with MYLUK-S to give something back the Deen of the Holy Prophet (SAW). She finished off her speech by saying that the sole aim of MYLUK-S was to bring a smile to the blessed face of our beloved Prophet Muhammad (SAW). 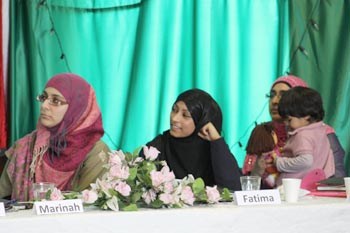 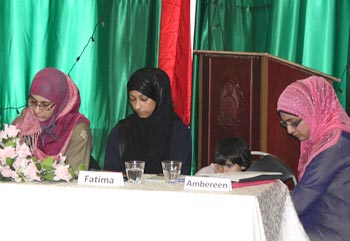 Mrs Jannat Elahi was then invited to the stage for a few closing words and du’a. She praised the executive for their efforts; thanked them for their time; and supplicated to Allah (SWT) for the success of Minhaj-ul-Quran and MYLUK-S. Mariya Qadri thanked the executive for their time and efforts and said that she really appreciated the tour initiative. Towards the end, the attendees were thanked for their participation and were given the opportunity to sign up for any vacancies that they were interested in. Quiz and feedback forms were handed out as well. The MYLUK-Sisters would like to thank Mariya Qadri and her team for their efforts in making the program a success. We also appreciate the refreshments which were provided and are sure that everybody enjoyed them very much! The MYLUK – S Executive body will be in Huddersfield on Saturday 24th of March 2012 at Tyreseal Building, Manchester Road, Thornton Lodge. Hudderfield, HD1 3JD and Manchester on Sunday 25th of March 2012 at Farghana Institute, 122 Withington Road, Manchester, M16 8FB. The duration of both events is 12 - 4 pm. 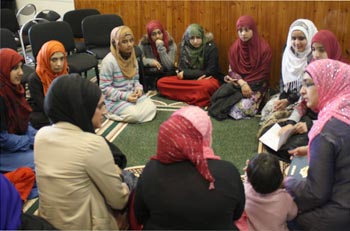 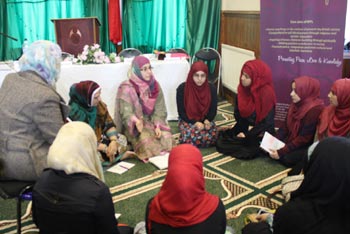 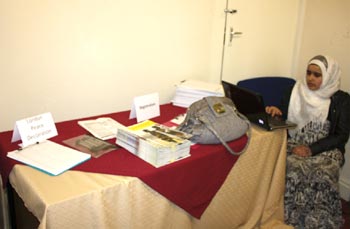 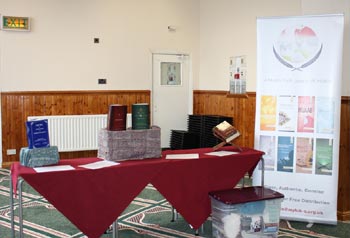 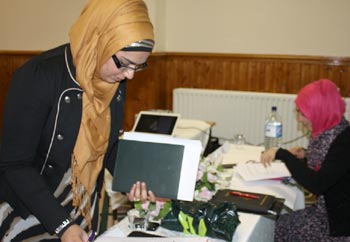 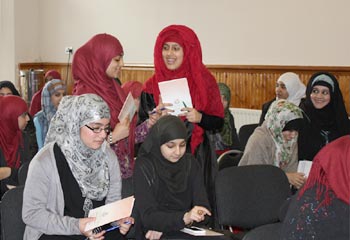