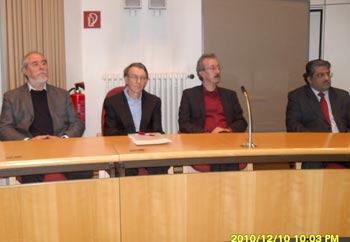 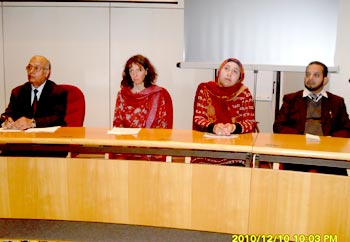 Dr. Christian Hanke. Mayor for Tiergarten District, stressed the need of an effective humanitarian work in flood affected areas in Pakistan in his opening remarks. He also supported the joint efforts of national and international community to overcome the difficulties facing the people in Pakistan in this hour of great trial. In this respect he also appreciated the activities of MQI Berlin for the help of flood affectees.

Mr. Michael Scherer played the Bagpipe, a music instrument and amused the guests with his musical performance. He also provided historical information about this instrument and its use by the colonial Power in the subcontinent and its recent use in Pakistan.

Mr. Mohammad Irshad, General Secretary of MQI Berlin, welcomed all the guests and journalists to this event. The audience was informed about the huge losses in the form of men and material caused by the recent flood. He stressed upon the need of channelizing effective support from the international community to bring this land and people back to normality. He also told the guests that Minhaj-ul-Quran International, under the patronage of Shaykh-ul-Islam Dr. Muhammad Tahir-ul-Qadri, is one of the biggest NGOs, which is working successfully in more than 90 countries of the world. The organization is reaching out to the affected areas from the beginning of this disaster and helping the distressed people in ways more than one. They were informed that MQI Berlin was established in 1999 and has always been fully active at the times of such crises. He pointed out the recent participation of MQI Berlin in the ZDF (German TV) transmission for appealing the German people for donation, which resulted in the collection of 8 million Euros at this occasion. He thanked the citizens of different countries living in Germany for their help and appealed for further donations as difficult challenge of rehabilitation is still far from being accomplished. The audience was also informed that MQI Berlin is working with Christians and Muslims organizations for the promotion of peace and integrity and constructive cooperation amongst them.Mr. Breitkreuz from Center for Inter-religious dialogue explained the activities of his organization aimed at building up cooperation among different communities. He also appreciated the efforts of MQI Berlin for promoting peaceful coexistence amongst followers of different faiths in Berlin. He also assured full cooperation from his organization in the future 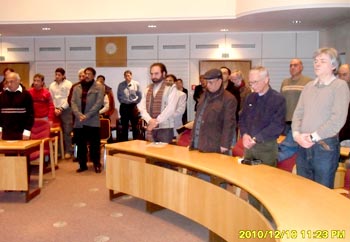 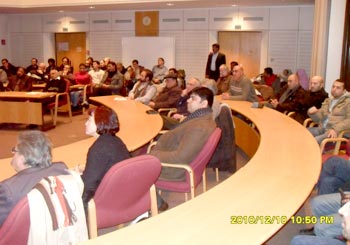 A documentary film of Minhaj Welfare Foundation was shown to the audience. Mrs. Naheed Imran, representative of Minhaj-ul-Quran Women League Berlin, summarized the documentary film in German language, which won great appreciation from the guests. She informed the guests about the relief and rehabilitation work undertaken by MWF in the flood affected areas. She also appealed for donations, so that the damages could be repaired quickly and the affected people could be enabled to resume their normal life.

The acting ambassador of Islamic Republic of Pakistan, His Excellency Mr. Khayyam Akbar, told the gathering that recent natural disaster has caused huge damage and suffering to the country and its people. The Government of Pakistan cannot cope up with such a monstrous disaster alone. So the world community has to come forward to tackle this problem. He thanked the German people for their generous help. He also appreciated the efforts of MQI Berlin.

Mr. Karl-Heinz-Nierdermeyer from SPD party pointed out the problem of Kashmir, which was left unsettled by the colonial power England. He said that this created a lot of tension in this region and caused a huge allocation for the defence sector thereby depriving social sector of much needed resources, which in turn served to augment the sufferings of people of both countries. The Governments should take effective measures for the development of their countries and peoples by finding a negotiated settlement of this age-old issue. He also drew the attention of the audience to the existing political and economical situation in Pakistan. He also pointed out that the environmental problems are also adding to such natural disasters. The trees should be planted for the improvement of environment so that such natural calamities could be avoided.

The question – answer session was moderated by Mr. Anna Traub. Answering a question about the flood causes, Mr. Niedermeyer pointed out that the trees are being cut around the rivers that are causing environmental problems. Mr. Shakeel Chughtai, patron media coordinator Europe Bureau, hinted out that the dams on the rivers in the occupied Kashmir were built up, which also caused flood in Pakistan.Mr Rukhsar Anjum, a well known poet in Berlin, presented his thoughts about the flood and existing situation in Pakistan in his poetry, which drew great applause amongst the audience.

Mr. Irshad requested the guests to stand silent for one minute in the memory of flood victims. In his closing remarks he said that there are emerging opportunities where there are crises and as united peoples belonging to different communities, we will overcome this difficult time once again. He also thanked all the participating guests and also thanked those who remained active for the successful completion of this program. At the end refreshments were also served to the guests. The program ended with Mr. Milkereit’s music at this occasion.