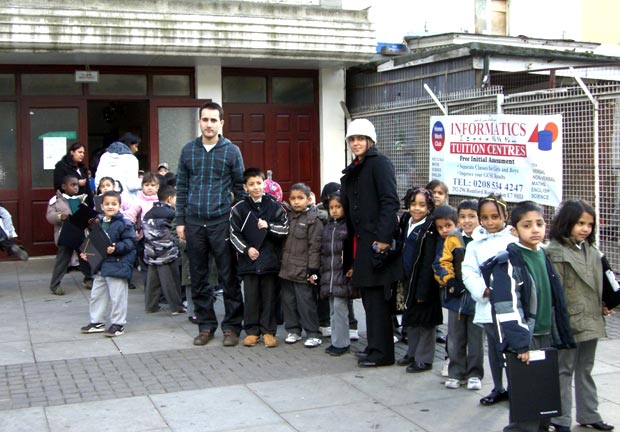 Minhaj-ul-Quran International London welcomed a class of primary school students aged 12 years old along with their teachers and parents from Earlham Primary school as part of “Visit a Place of Worship Week” on Monday 2nd March 09. Left: Brother Shoaib Iqbal of the Muslim Youth League with teacher, Joyti Dovedi and pupils of Earlham Primary School. The class arrived at 2pm showing a lot of excitement and enthusiasm with Brother Shoaib Iqbal at the entrance. Brother Rafiq Ahmad welcomed the children and assembled them in the main prayer hall where an introduction of Islam and Muslims in general was given. The teachers also said that the children had prepared questions that they had discussed. Rafiq told the children the story of the Holy Prophet Muhammad (SAW); his truthfulness and kindness to all people and animals. He narrated the story of when Prophet Muhammad (SAW) informed the people of Mecca of his Prophet hood. The Holy Prophet (SAW) stood on top of Mount Safa and said “Would you believe me, if I told you that there was an army coming to attack you from the other side of the mountain” The people replied “Yes, we would believe you”. The Prophet asked them why. They said “because you are truthful and trustworthy.” 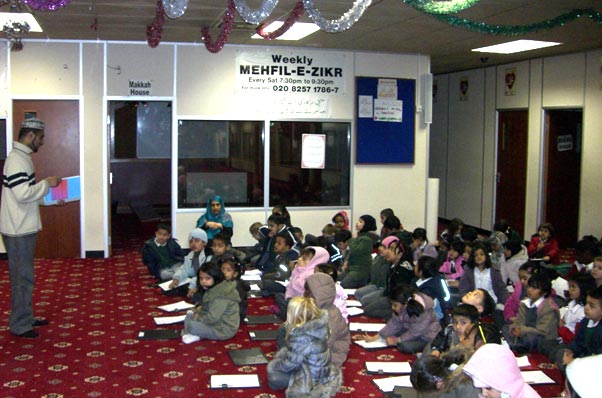 This was a message for the children to always be truthful to their parents, teachers and class fellows. Rafiq also explained the close relationship between the Muslims and Europe especially Britain; why Muslims pray and fast. The children were also taught that charity to the poor is an important part of Islam and that smiling is also considered to be a form of charity in Islam. The class then had their opportunity to ask their chosen questions. They were especially attracted to the decorations and asked why the mosque had these items hanging from the ceilings and walls. The children were told that this is a special month (Rabi-ul-Awwal) for the Muslims as it was the time when Holy Prophet Muhammad (SAW) was born in Mecca, and it was a period of happiness and celebration.

The children also asked why Muslims read the Quran and were told that it was read due to it being a source of guidance, which was revealed to Holy Prophet (SAW). The children were then taken on a tour of the mosque by Rafiq and Shoaib and were shown the member (pulpit) and classrooms. They were also attracted to traditional Islamic paintings by a Somali artist displayed in one of the rooms (Right).