Minhaj-ul-Quran International attended and actively participated in the 62nd Commission on the Status of Women organized by the UN Women at the United Nations Headquarters in New York, USA. MQI has special consultative status with the UN since 2011 and is continuously invited to UN meetings and conferences around the world, including North America and Europe.

MQI North America representatives, Sister Safyah A. Malik, member of the Social Media Coordination Council of MQI and President of MYL Sisters in Canada, and Sister Aisha Ahmed, executive member of MYL Sisters Canada, attended the UN conference on behalf of Minhaj-ul-Quran International from Monday 12th March to Friday 16th March 2018. The opening ceremony of the conference was held at the UN General Assembly Hall. 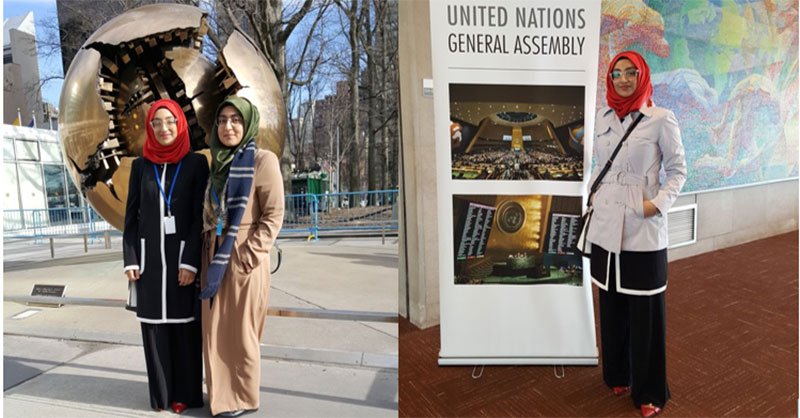 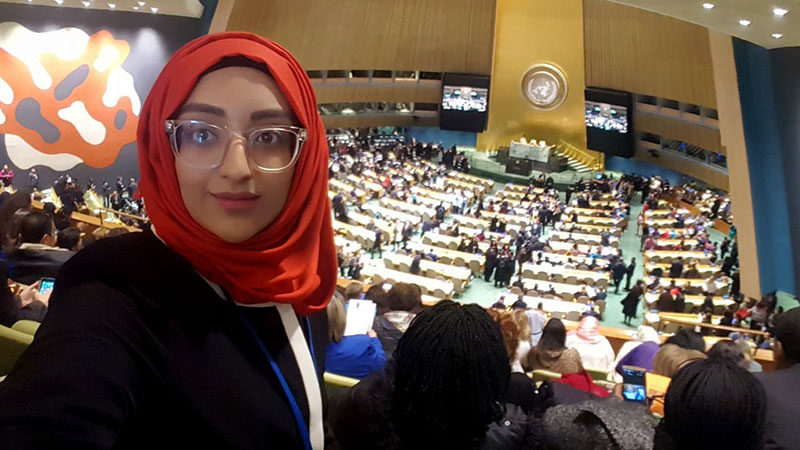 MQI Representative, Safyah A. Malik at the Opening Session of the Commission on the Status of Women at the UN General Assembly Hall. (Pictured above)

The aforementioned representatives of Minhaj-ul-Quran International attended the following 11 official UN conference events throughout the week. They networked and spoke about the work of MQI and Dr Muhammad Tahir-ul-Qadri with a variety of diverse change makers and dignitaries from around the world at:

● Event held by dignitaries of Malawi

○ Title: PARLIAMENTARY MEETING AT THE 62ND SESSION OF THE COMMISSION ON THE STATUS OF WOMEN: PARLIAMENTS DELIVER FOR RURAL WOMEN AND GIRLS

○ Title: TOWN HALL MEETING WITH THE SECRETARY-GENERAL AND CIVIL SOCIETY ON THE MARGINS OF THE CSW

● Event held by The Government of Japan

○ Title: INCLUSIVE PEACEBUILDING: GENDER PERSPECTIVES FROM AND ON LIBYA

During the above events, the following dignitaries were personally introduced to the extensive work of Minhaj-ul-Quran International and Shaykh-ul-Islam Dr Muhammad Tahir-ul-Qadri. They were also gifted books written by Shaykh-ul-Islam and engaged with the MQI representatives with growing interest regarding the ongoing projects and work of MQI. 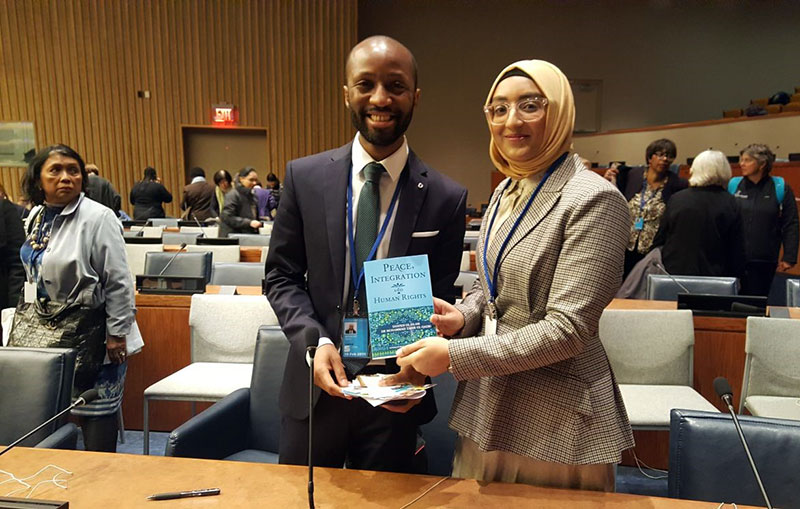 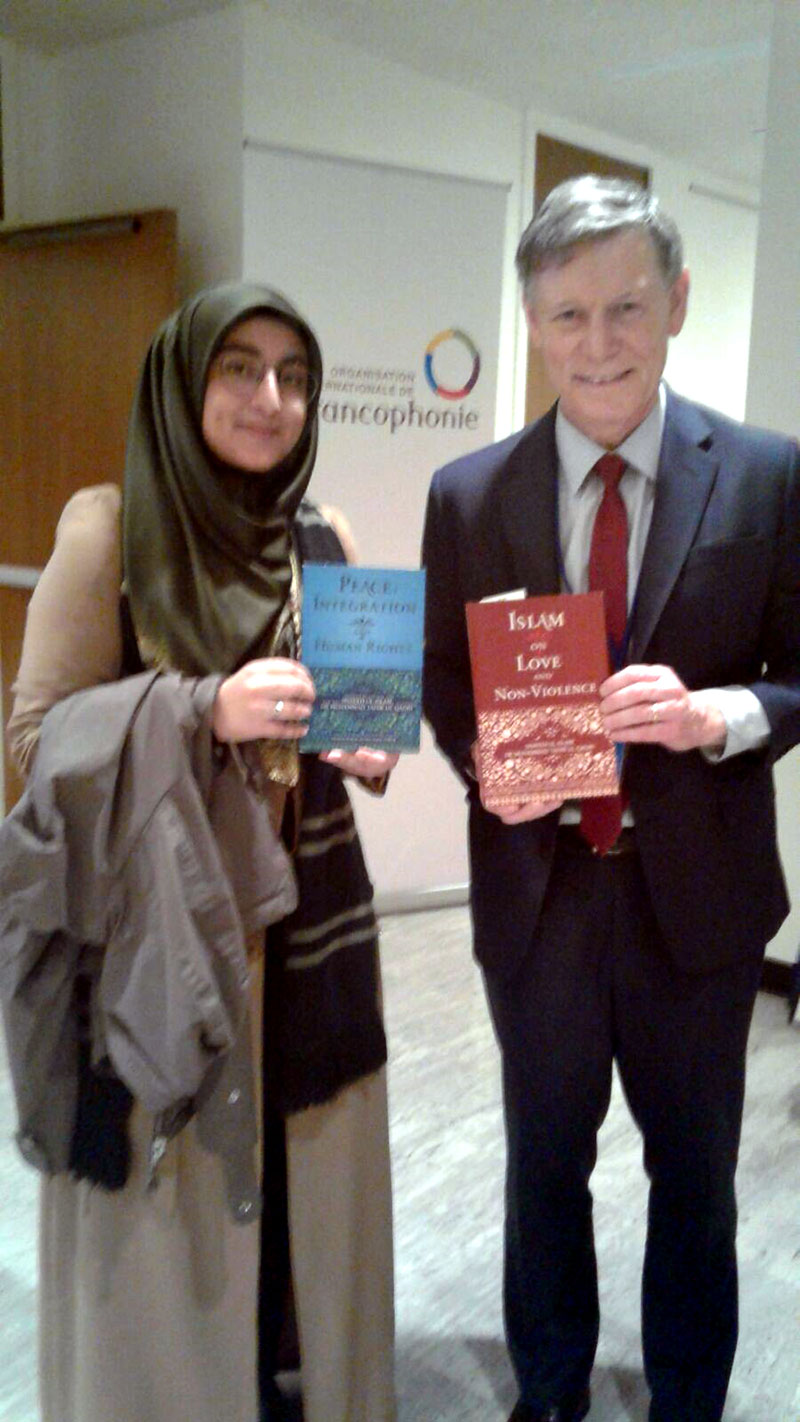 Mr Terry Duguid, MP in Canada, Parliamentary Secretary to the Minister of Status of Women, presented with ‘Peace, Integration & Human Rights’ and ‘Islam on Love & Non-Violence’ written by Dr Muhammad Tahir-ul-Qadri (Pictured above) 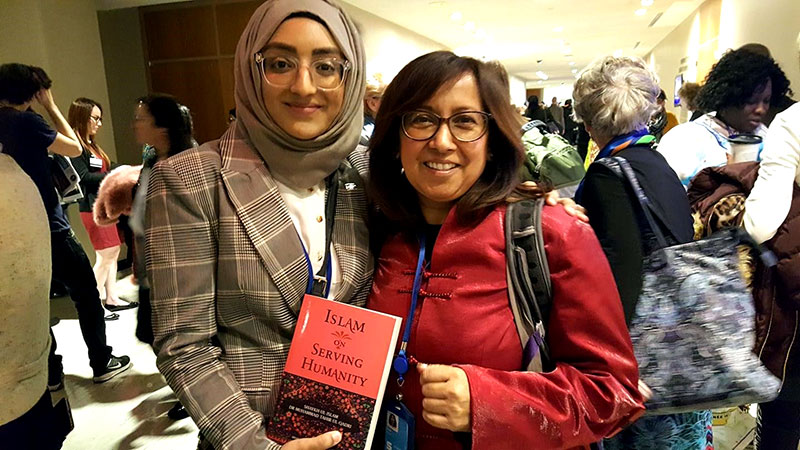 Ms. Geraldine Byrne Nason (Ireland), Chair–designate at the UN for the Western European and other States Group, she spoke about the importance of being inclusive of the different faiths and religions in the Commission of the Status of Women. She was introduced to the work of Minhaj-ul-Quran International in relation to bridging the gap between both Muslim and Non-Muslim communities around the world and was presented with the book ‘Relations of Muslims and non-Muslims’ written by Dr Muhammad Tahir-ul-Qadri (Pictured above)

Mr. Geoff Regan, Speaker of the House of Commons in Canada. He brought a large delegation of Canadian Parliamentarians to attend the conference. He was happy to see participation from MQI in this years CSW. He was gifted the 600-page Fatwa on Terrorism and Suicide Bombings by Dr Muhammad Tahir-ul-Qadri. (Pictured above) 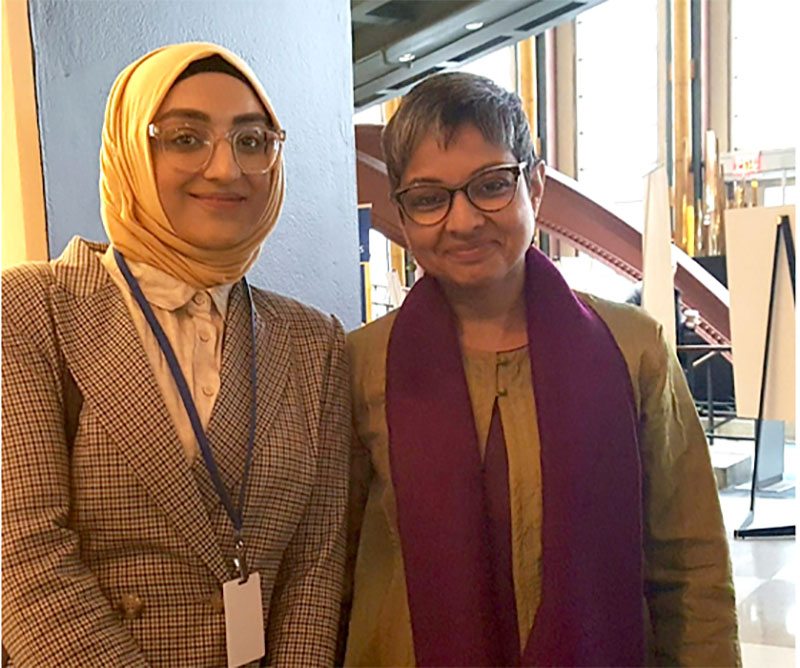 Ms. Lopa Banerjee, UN Women Director, Civil Society Division. She was happy to see MQI participating in the Commission on the Status of Women and liked the values and work being carried out by Minhaj-ul-Quran International. (Pictured above)

Gabrielle Cuevas Barron, President, Inter Parliamentary Union at the UN, where governments around the world are given a platform to discuss and address global issues at the high level. She was happy to hear of the work of Minhaj-ul-Quran International in over 100 countries worldwide and was gifted the book 'Islam on Love and Non-Violence' by Dr Muhammad Tahir-ul-Qadri. (Pictured above) 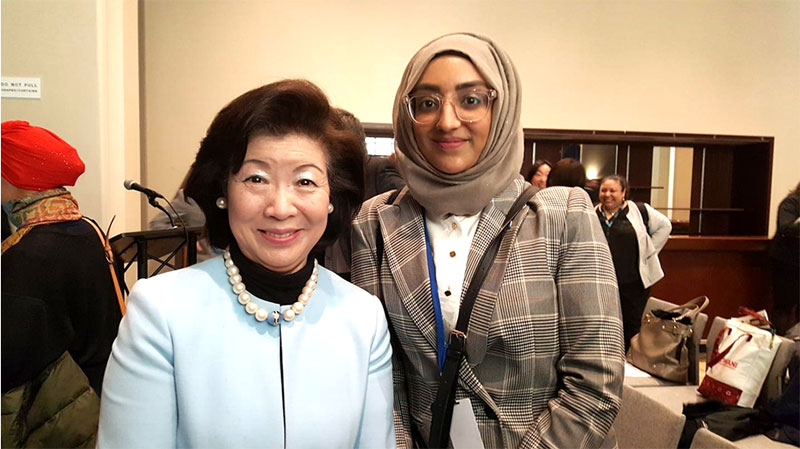 Prof. Akiko Yamanaka, The Japan Institute of International Affairs. Former Vice Minister for Foreign affairs, Senior Diplomatic Fellow of Central Forum Cambridge University and Special Advisor to the President of the ERIA. She was happy to learn of the efforts of MQI and also that her Late friend, Respected Benazir Bhutto, was also a MQI life member. (Pictured above) 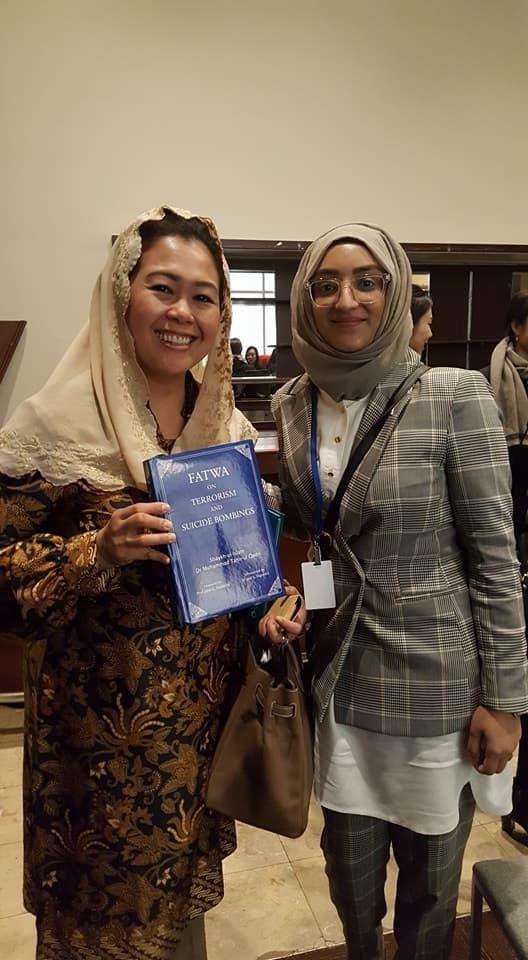 Yenny Zannuba Wahid, Director, The Wahid Foundation in Indonesia (UN Women partner organization), they work with the UN to find new and innovative ways to counter terrorism within Muslim communities primarily in Indonesia but also in Asia and Bangladesh. She spoke about the dire need for the work that MQI does to present a clear and concise counter-narrative to the terrorist ideology. She was delighted to be gifted the Fatwa on Suicide Bombings and Terrorism by Dr Muhammad Tahir-ul-Qadri. Upon opening the book she informed us that she also personally knows Prof. John L. Esposito (writer of the foreword in the Fatwa). (Pictured above) 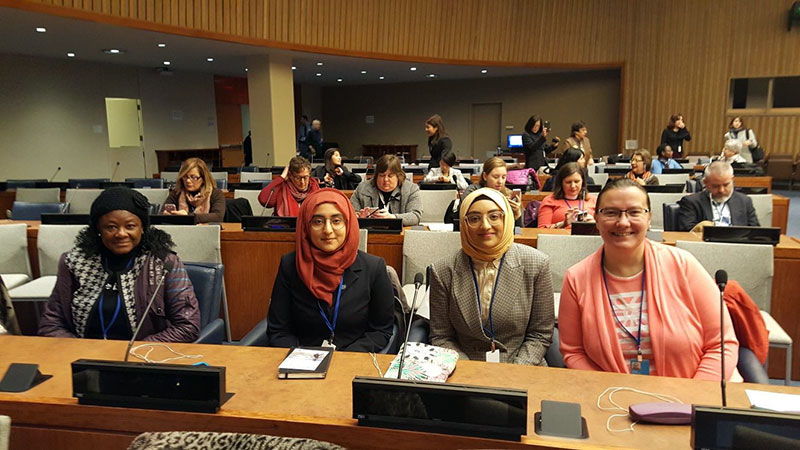 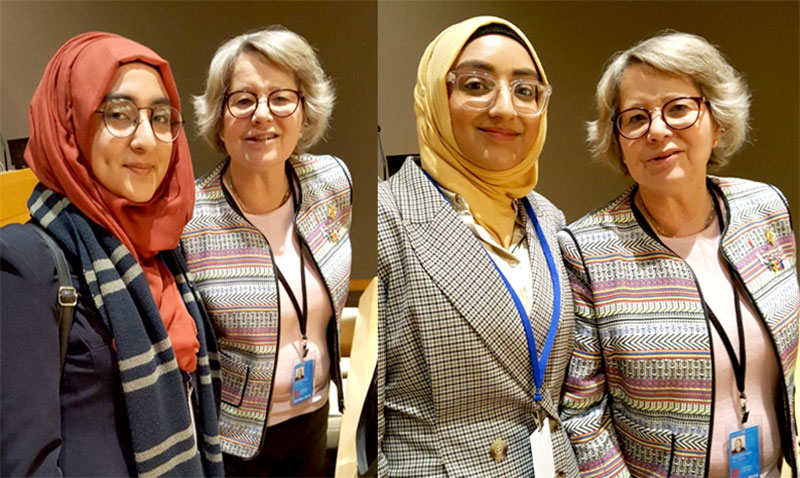 Brigitte Polonovski, International Council of Women, France. Senior Adviser Human Rights, Violence Against Women and Girls. We discussed the Hijab and Niqab (face-covering) ban in France and the right to every woman to be able to choose how they would like to dress. (Pictured above) 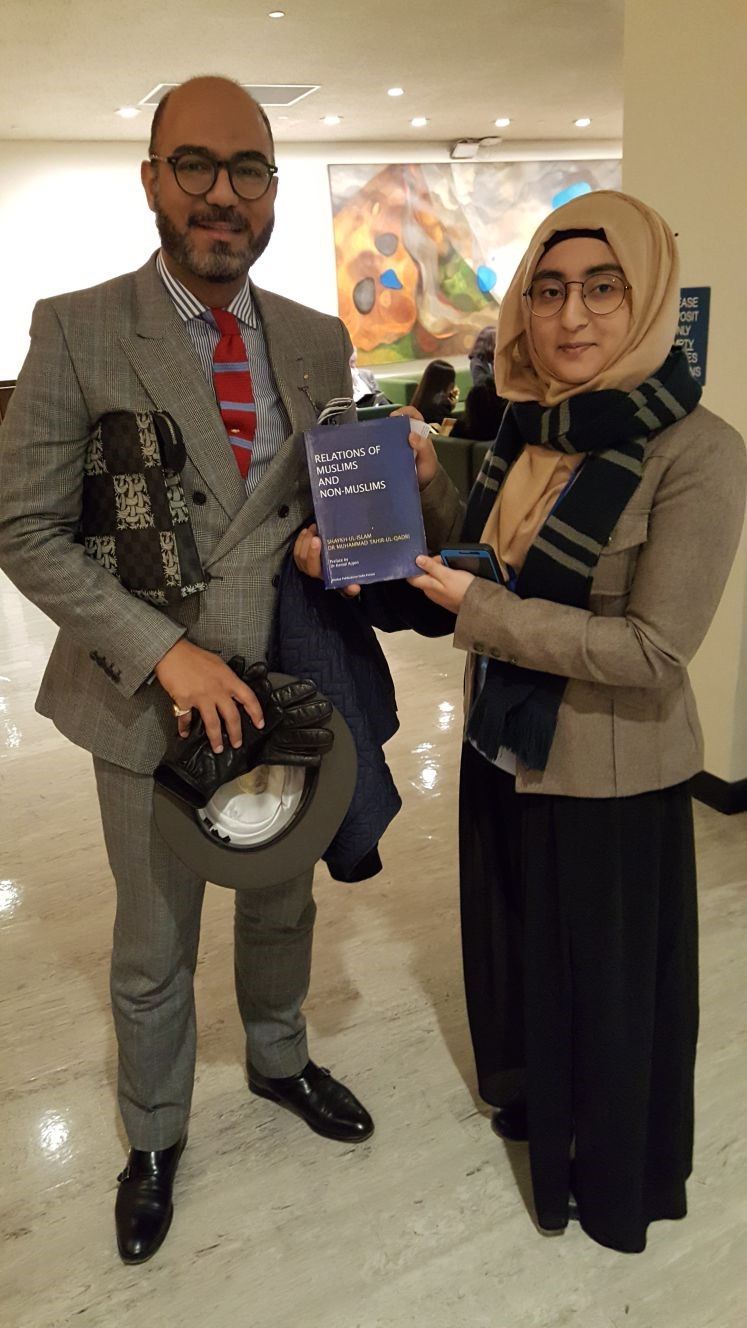 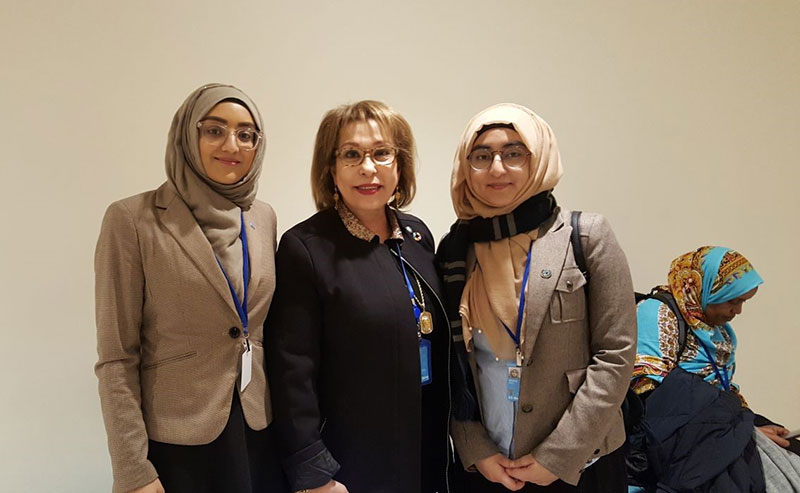 Salwa Kader, President, International Federation for Peace and Sustainable Development (US Federation for the Middle East Peace USFMEP), Representative to UN. (Pictured above)

Ms Phumzile Mlambo-Ngcuka, Executive Director, United Nations Entity for Gender Equality and the Empowerment of Women, Under-Secretary-General at the UN, presented with the book, ‘Islam on Serving Humanity’ written by Dr Muhammad Tahir-ul-Qadri. (Pictured above) 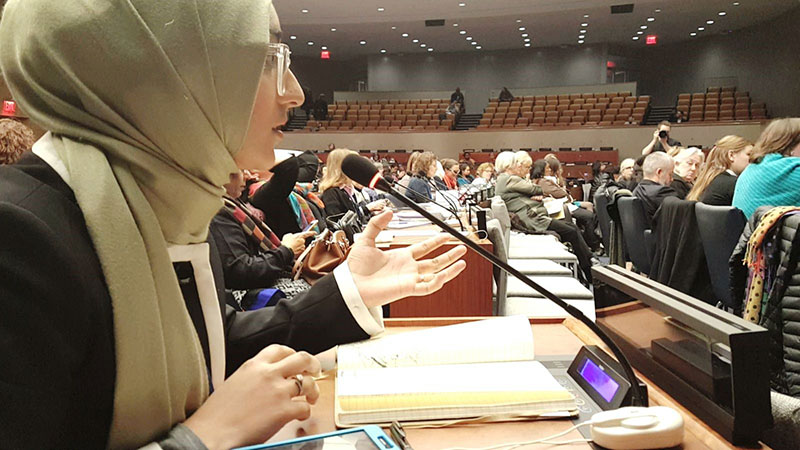 MQI Representative, Safyah A. Malik speaking in the informal NGO briefing with Ms Phumzile Mlambo-Ngcuka, Executive Director, United Nations Entity for Gender Equality and the Empowerment of Women, Under-Secretary-General for the UN. (Pictured above)

In the Informal NGO briefing hosted by the Executive Director of UN Women, Under-Secretary-General at the UN Ms. Phumzile Mlambo-Ngcuka, all the participating NGOs were asked to present questions relating to each NGOs field of work. The discussion was based on how the UN can help in terms of women empowerment around the world who are being abused. Minhaj-ul-Quran was the only NGO at the UN that was representing Muslim women living in the West. The issue of young women in the West who are abused, oppressed and brainwashed into becoming "Jihadi Brides" was discussed and how the terrorist organizations around the world wrongfully use international policies to influence and try to justify their views to the vulnerable Muslims in the West.

The question was posed on how the UN was working to improve the policies around the world that are reinforcing violence against women and children. The extensive peace-building projects of Minhaj-ul-Quran International and Dr Muhammad Tahir-ul-Qadri were explained on the floor of the UN meeting, including the 600-page Fatwa by Dr Muhammad Tahir-ul-Qadri. Sister Safyah explained MQI’s ongoing work, both in the West and the Muslim countries, to provide strong evidences against the terrorist organizations, and the importance of presenting the counter-narrative of the terrorist ideology.

Below is a list of dignitaries who also spoke to the MQI representatives and were interested in the work, vision and ongoing projects of Minhaj-ul-Quran International and Dr Muhammad Tahir-ul-Qadri: