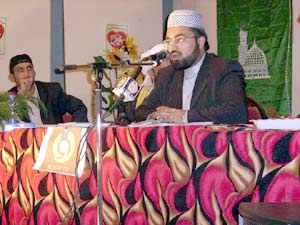 Minhaj-ul-Quran International (MQI) is enlightening the hearts of many Muslims around the globe with the love of the Beloved Prophet Muhammad (saw). It organises Mawid-un-Nabi (saw) gatherings around the world to strengthen the relationship with our Beloved Prophet (saw).

Ballaghderreen is a city where about 40 Pakistani Muslim families reside. The last 4 months Allama sahb travelled every week for 4 hours from Dublin to Ballaghderreen to motivate the Muslims, holding Zikr gaherings and introducing the aims and objectives of Minhaj-ul-Quran International. 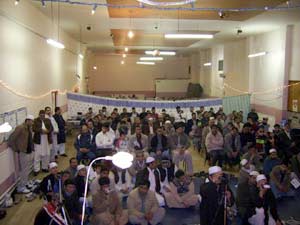 This year during Rabi-ul-Awwal 2 Milad gatherings were organised. Annual Milad-un-Nabi Conference was organised in the Community Centre of Ballaghderreen.

This was the first time the Muslims in Ballaghderreen enjoyed such a spiritual gathering.

The First Annual Milad-un-Nabi Conference took place on Saturday 28th March 2008 in the Community Centre of Ballaghderreen. 500 Brothers are sisters joined the Conference. Many Muslims from surrounding cities like Limerick, Longford, Ballayhaunus and Ballyrock joined the conference.

A team from Noor TV came from the UK to record the conference. 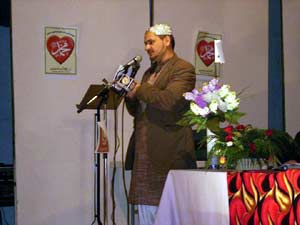 The conference started with recitation of the Holy Quran. Hafiz Habib from Ballyhaunus recited very beautifully verses from the Holy Quran. Nasheeds were recited by, Owais, Syed Hafiz Jawad Haider Shah. Brother Sajjad thanked all for coming and delivered his talk. Then 2 guest Nasheed reciters who came all the way from the UK enlighted the hearts of the audience with love of Rasool-ullah (saw). These brothers were Mukhtar-ul-Mustafa (who is the host of Nasheed programme on Noor TV) and Muhammad Milad Raza Qadri. After the heart warming nasheed Mian Awais Ahmad invited the main speaker of the conference Allama Zille-Umar Qadri sahb. 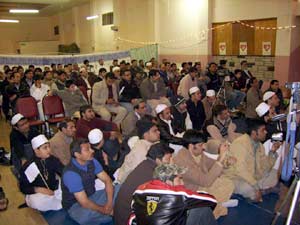 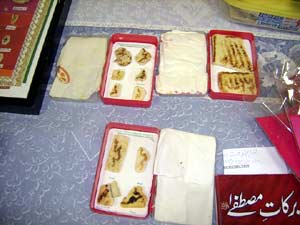