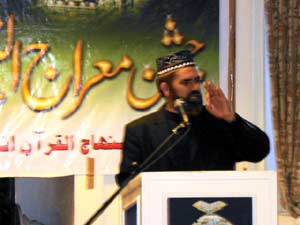 By the Grace and Blessings of Almighty Allah (swt) and His Beloved Prophet Muhammad (saw)Â the evening of saturday 11th august 2007 was an inspirational one as the annual Meeraj - un - Nabi (saw) programme organised by MInhaj - ul - Quran International Oslo took place in the Al Musrafa Hall. Masha Allah a large attendence of both men, women young and old gathered to participate in this programme.

The programme commenced with recitation of The Holy Quran. Vice President Minhaj - ul - Quran International Norway Respected Iftikhar Mehmood welcomed the audience and congratulated the organisors on their special efforts. Then some beautiful nasheeds were recited in the prais of Rasool ul llah (saw) by Ata ul Mustafa, Yasar Arfaat, Qasim Mehmood and Haji Abdul Rauf. From Sisterwings Iqra Mushtaq and Amina Zaffar recited Nasheeds with Duff the entire audience joined them in reciting Nasheeds. 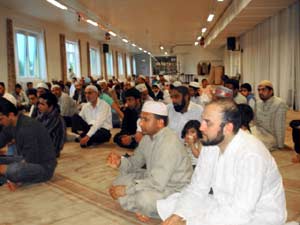 Director of Minhaj Education center Oslo Respected Allama Noor Ahmad Noor addressed the gathering on the topic ofÂ "Safrey Meeraj" In the explanation of the Quranic verse (Translation) He opened some of the secrets between Allah (swt) and His Beloved Prophet Muhammad (saww) on the Holy night of Shabe Meeraj. He told the audience that we found very brief information in The Holy Quran about this event particularly the secrets of the meeting has not been mentioned. But it has been explained with details in Hadith. He told the audience that one dayÂ Hazrat Abu Bakar Saddique (Ra) asked The Holy Prophet (saww) about one of the secrets, then Holy Prophet (saww) told that Allah (swt) said to me that, "Â O' Beloved if i don't wanted to meet your Umatis (followers) than i have never asked them about their (umati's) deeds. Afterwards on the request of Hazrat Ummar Farooq (Ra), Hazrat Usman (Ra), Hazrat Ali (Ra), Hazrat Fatima tu Zahra (Ra) Aqa (saww) has opened some of the secrets. Then he highlighted upon the gifts of Aqa (saww)'s and the Ummati's were awarded on that Holy night by Allah (swt).

The programme came to end with a beautiful dua and salaam to Rasool ul llah (saww) led by Respected Allama Noor Ahmad Noor. May Allah (swt) accept the humble efforts of MQI, and May He Guid us and strengthen our link with His Beloved Prophet Muhammad (saww) and with our Respected Shaikh - ul - Islam Doctor Muhammad Tahir - ul - Qadri. 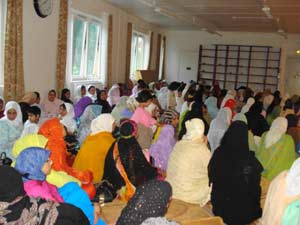 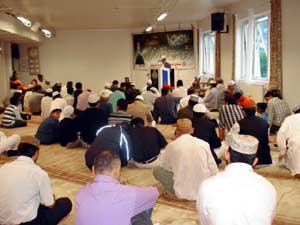