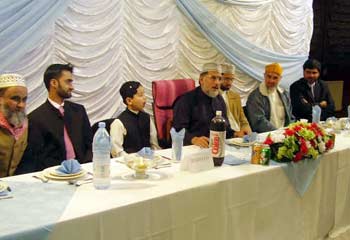 Shaykh-ul-Islam Prof. Dr. Muhammad Tahir-ul-Qadri attended the nikah ceremony of Jawed Iqbal Tahiri at Idara Minhaj-ul-Quran London. It was a great function which was illuminated due to the presence of Shaykh-ul-Islam. Mr Hassan Muhyuddin Qadri accompanied Shaykh-ul-Islam together with Mr Hammad Mustafa Qadri.

The great internationally renowned naat khawan Afzal Noshahi was a special guest at the function. He sang a naat written by Shaykh-ul-Islam which was written in three languages including Purbi and Hindi. He wrote this while he was at the darbar of Hazrat Khawaja Nizamuddin Awliya (radiyallahu taala anhu).

Shaykh-ul-Islam highly praised the MYL for how they had prepared and arranged for the function. 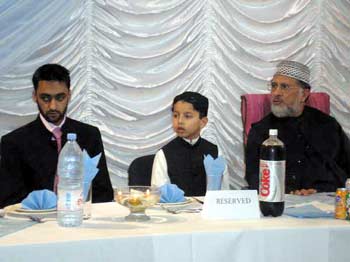 Members of MQI from all over the UK had come to the ceremony to capture a glimpse of Shaykh-ul-Islam. Delegations had come from as far as Glasgow and Dundee with the mere intention of getting a few words of wisdom from their beloved leader. Other Executive members, position holders and affiliates had come from Birmingham, Walsal, Manchester, Nelson, Halifax, London, Oldham, High Wycombe etc.

Shaykh-ul-Islam did a very heart warming and detailed dua for the newly married couple, for those who were present and for the workers, supporters and success of the mission in general.

The function concluded with the Isha Prayer which was lead by Shaykh-ul-Islam. The congregation were taken away by his recitation and wished it would continue for ever.