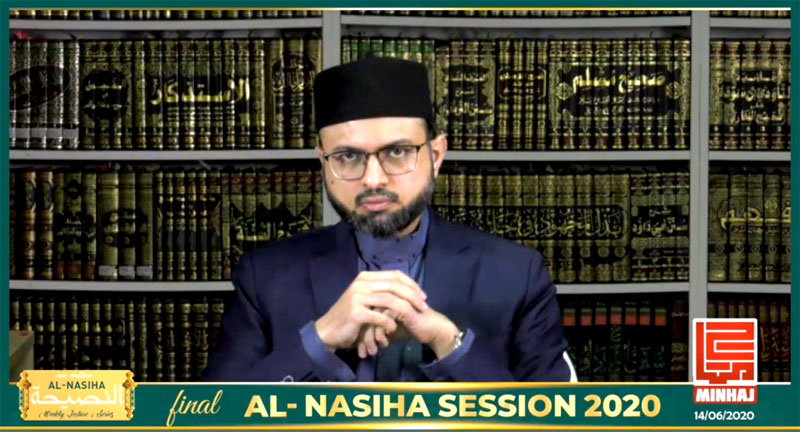 Chairman MQI Supreme Council Dr. Hassan Mohi-ud-Din Qadri addressed the final session of the 7-weeks al-Nasiha series titled ‘Strengthening the family unit: The importance of the role of a father, a son and a brother.’

Speaking on the occasion, Dr Hassan said that children are a huge blessing from Allah Almighty and if they are brought up in accordance with the code of conduct the Din and the Prophetic teachings demonstrate, it will result in pious off-springs. He said that a pious child is a huge blessing, if the same child is brought up in the opposite manner, it becomes the means of adversity and grief. He said the Din grades the upbringing of a child obligatory, adding that protecting the blessings of Allah i.e. the children are as obligatory as obeying and respecting the parents.

Dr Hassan Mohi-ud-Din Qadri said Allah has laid responsibilities and a specific role upon each family member in order to strengthen the family unit. He said that according to Shariah, every role performed wisely will beautify its purpose and depict a true picture of a Paradise.

Highlighting the importance of tarbiyah (training) in light of the Qur’anic narratives of various Prophets, Dr. Hassan narrated the whole lesson that Allah Almighty tells us in Surah Yusuf through the relation of a father and son; Sayyiduna Ya’qub (A.S) and Sayyiduna Yahya (A.S.)

Dr Hassan said that Sayyiduna Ya’qub’ had laid the foundation of his children’s tarbiyah upon the teachings of Din and heard its verification from his children before his departure from this world. He said Sayyiduna Ya’qub's (A.S) approach depicts a true frame of patience, modesty, and humbleness. His silence’s purpose was always to make his sons realize their fault through a modest and humble approach. This demonstrates the lesson of patience parents need to adhere to while attending to the mistakes of children, alongside the firm belief in Allah.

He said the upbringing of children requires patience, tawakkul, struggle and a firm arrangement, effort and piety, trust, and modesty towards children. He further said despite all the tribulations Sayyiduna Yusuf (A.S.) gradually went through, he never uttered a single evil word up till the point to where his brothers apologized nor after it, he did not take revenge nor cursed them.

This conduct is a true depiction of the upbringing Sayyiduna Yusuf ( A.S.) had received from his father Sayyiduna Ya’qub (A.S)

Dr. Hassan further emphasized the lessons the Qur’an gives through the narrations of various Prophets and in particular the Prophet (peace and blessings be upon him).