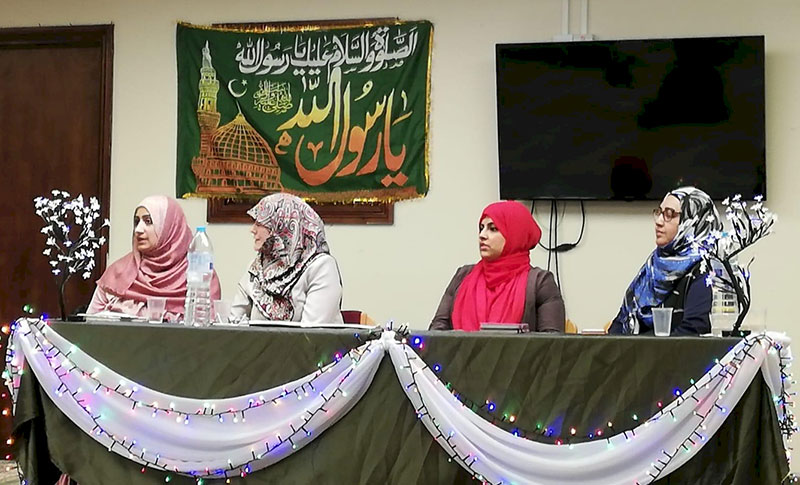 The event included recitation of the Holy Quran, beautiful naats and nasheed by many sisters.

English speaker Sister Khadiah Atkinson from London delivered an inspiring and motivational talk initially looking at brief comparisons between British and Islamic traditions in relation to the narratives around women and their positioning within these societies. Referring to Dr Ghazala Hassan Qadri’s lecture series from Tazkiya camp 2018 - the topic of self-purification was explored with specific attention given to modesty (hiya) and how this aspect of Islam does not create conflict with being young British women within U.K. Further examples were drawn from the Holy Prophet ﷺ and Quran. 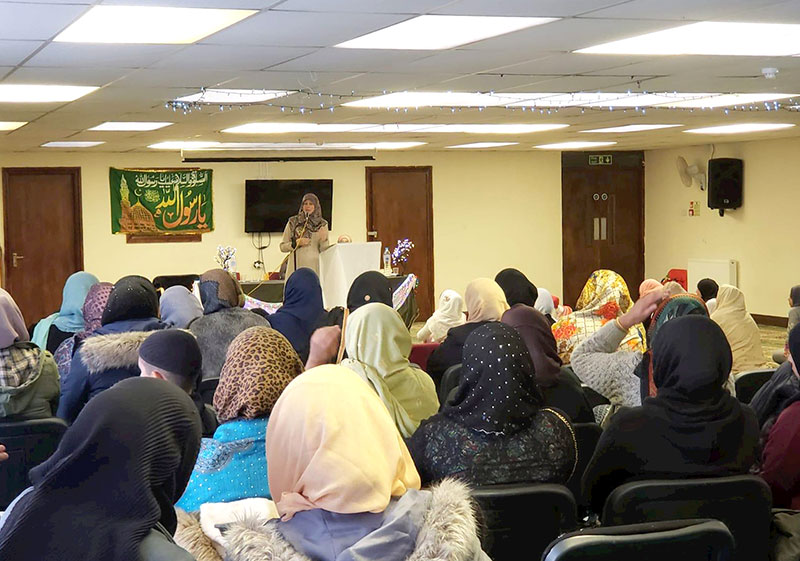 Urdu speaker Sister Faiza Qadri delivered an inspiring speech in Urdu. She spoke about the oppressive condition’s women had to endure before the spread of Islam such as the inability to exercise the right to marry, divorce, vote and inherit. She gave practical examples from the Sunnah of our beloved Holy Prophet ﷺ on how Islam has conferred equality of status and respect on women. A beautiful Hadith was narrated when the Prophet ﷺ was invited by a Persian neighbour to dinner and He ﷺ didn’t accept the proposal until His ﷺ blessed wife Hazrat Ayesha (RA) was invited too.

Sister Faiza Qadri highlighted that women in the time of the Holy Prophet made significant contributions to the improvement of welfare of their societies and public healthcare. During of the Battle of Khandaq a tent was set up outside the battle field and female nurses treated the wounded and injured. She further highlighted that women played a vital role in public life and held esteemed positions such as being a member of parliament. A Hadith was narrated the once Hazrat Umar (RA) suggested that a limit should be placed upon Mehr (dowry), but a lady stood up giving references from Holy Quran and said when Allah (SWT) didn’t place a limit then how would he. Not only did Hazrat Umar (RA) accept the argument but also said he was wrong to suggest it and the woman was right to bring forth her case. Sister Faiza Qadri encouraged sister to purchase "Islam Mein Khawateen Keh Haqooq" by Shaykh-ul-Islam Dr Muhammad Tahir-ul-Qadri.

Humaira Ali (Minhaj Sisters) gave a presentation on Minhaj Dawah Project’s distribution of free Islamic literature in mosques, prisons, community centres and public libraries in the UK. The audience were informed about the work carried out by MDP since January 2012 in prisons to support vulnerable individuals and prevent the spread of extremism. They also learn about MDP’s work in supporting newly converted Muslims on their journey to learning about Islam. The audience were invited to join and project and serve their communities through Da’wa work and propagation of the true teachings of Islam. 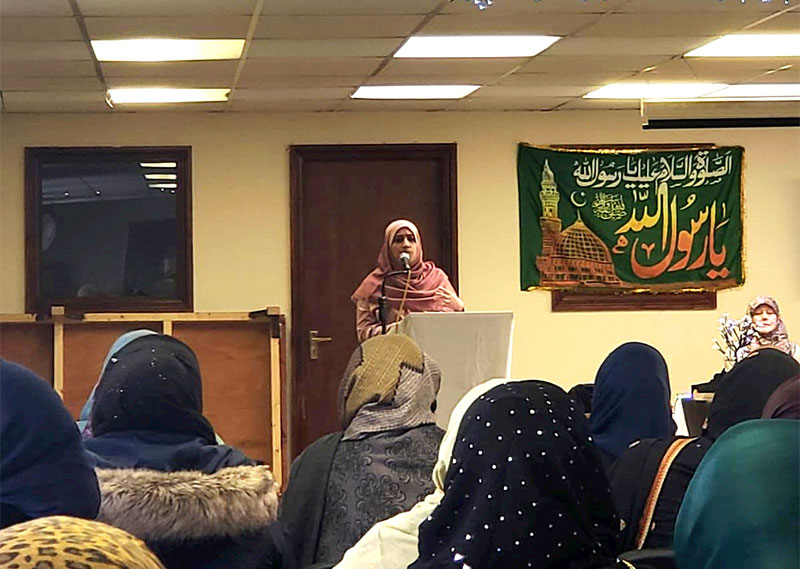 Sister Ferzana Ayaz (Minhaj Sisters, Milton Keynes) informed members of the audience of short courses on Tajwid, Tafseer, Aqida and Seerah of the Prophet Muhammad ﷺ Tajweed that she was to hold in the area and urged sisters to inform their relatives and friends to join these courses to learn about Islam.

Humaira Ali invited the audience to purchase the latest works of Shaykh-ul -Islam Dr Muhammad Tahir ul Qadri for their children, neighbours or as gifts to give to their family and friends in Ramadhan. £358 worth of books were sold, and further orders of books were taken from the audience to be delivered to their homes.

Sister Rukhsana Sarfraz (Minhaj Sisters) organized a Minhaj Dawah Project stall where free literature was distributed, and donations were given to support the production of future free literature. 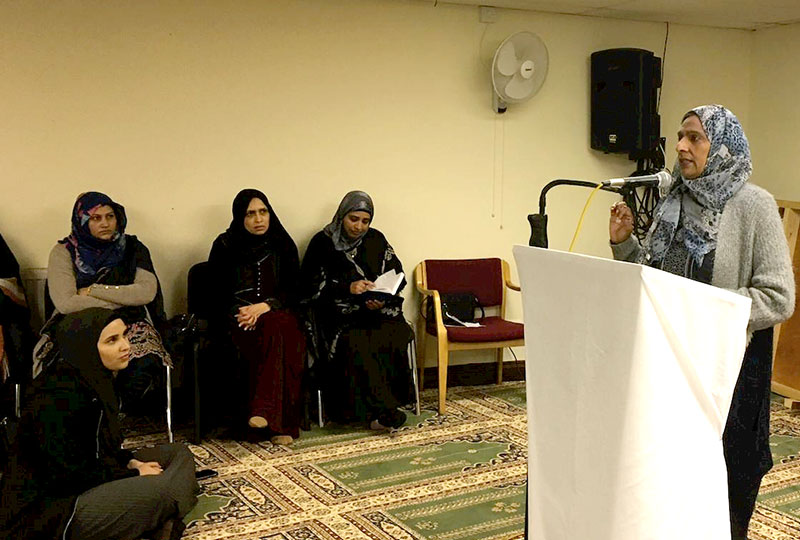 Sister Rukhsana Sarfraz liken Minhaj ul Quran International to a highly perfumed bouquet of flowers with separate flowers in the bouquet being a forum of MQI. She encouraged sisters from the audience to join Minhaj Sisters or any other forum that they wished, but to join and make a difference in their communities. Sister Rukhsana highlighted some key projects of Minhaj Welfare Foundation such as the Agosh Project that supports orphans and needy up to adulthood, and the Water for All Project that supports the poor and needy through building hand pump and digging wells. She informed sisters of how to purchase Palestinian Medjoul dates to support suffering Palestinian farmers.

The event concluded with Dhikr and a heartfelt Dua. 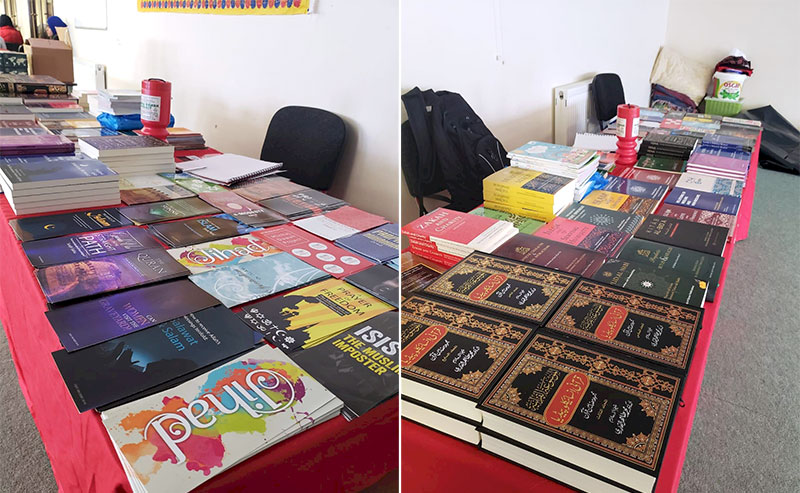 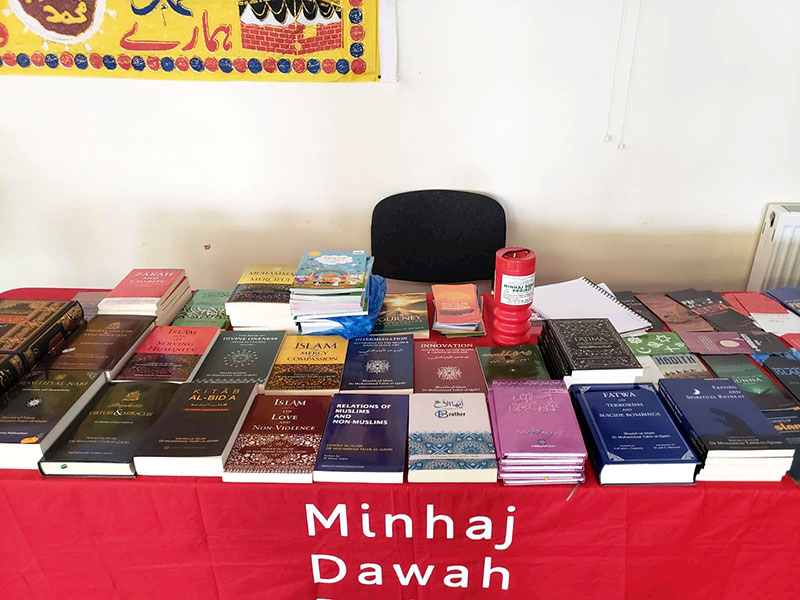 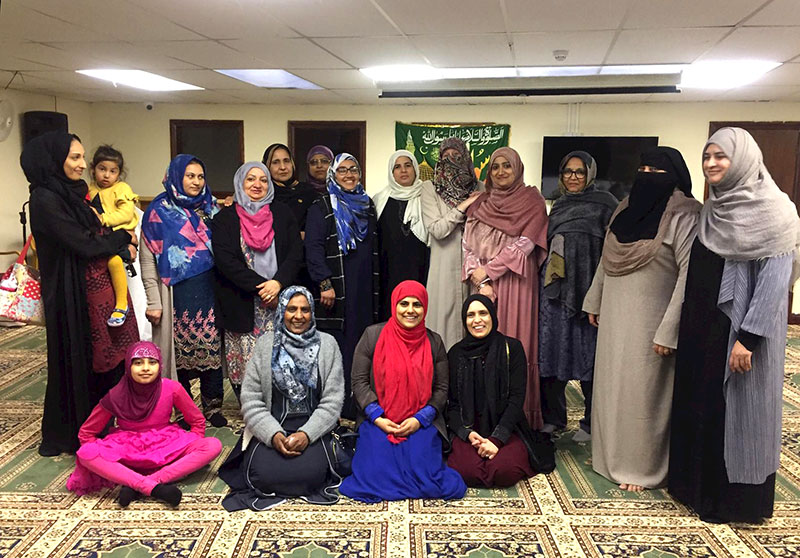