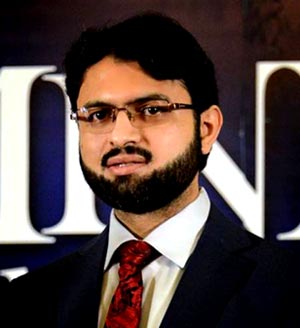 Dr Hassan Mohi-ud-Din Qadri is recognised as a young renowned Islamic scholar, who prolific orator and an energetic human rights campaigner and internationally highlighting Islam as a religion of peace and harmony for all mankind. Dr. Hassan was declared as a well acknowledged young “Muslim and Champion of Unity worldwide” by the FARS news agency of Iran.

Dr. Hassan has received his Doctorate degree from the biggest Islamic University which resides in Cairo Egypt. He has written a comprehensive thesis in Arabic titled ‘The Constitution of Medina and Modern Constitutional Principles’ (A Comparative Study of American, British & European Constitutional Law), Dr. Hassan is also recognized as a constitutional lawyer creating a synthesis between modern and Islamic sciences by the World Economic Forum.

Dr. Hassan is currently the Chairman Supreme Council of Minhaj-ul-Quran International, which is one of the largest non-profitable organizations in the world. Minhaj-ul-Quran (MQI) is an organization with its networks in more the 90 countries. Dr. Hassan overlooks the imperative striving work on a globally level in many dimensions of the society to promote education, moderation, interfaith harmony and global peace. Dr. Hassan is also currently, the member of the Boards of Governors for Minhaj University Lahore (Pakistan). He overlooks polices and producers’ of the University, Dr. Hassan is also the Supervisor of faculty Shairah at the Minhaj University. Dr. Hassan also heads the Minhaj Education Society (MES) which is the largest non-governmental educational network in Pakistan which has more the 637 schools and colleges and an endorsed University (Minhaj University Lahore), and finally the head of Minhaj Welfare Foundation (MWF), a welfare organization where Dr. Hassan monitors, and makes sure basic living necessities reach the needy.

Dr. Hassan Qadri in addition to a great young scholar, he has written several papers and is currently working on many books on various topics such as; Human Rights in Islam, Political issues and many more.