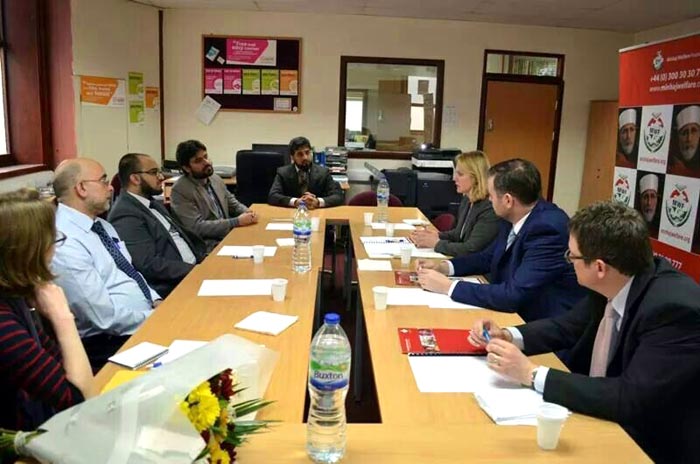 Secretary of State for International Development and MP Justine Greening met directors of Minhaj Welfare Foundation in Nelson, Pendle, to discuss the substantial British aid effort and what more could be done internationally to help those suffering in Third World.

Justine Greening (heads DFid/UKaid) met with the Minhaj Welfare Foundation (MWF) team at the local regional office in Nelson. She talked about the impact foreign aid has had internationally.

The Secretary of State said:

“DFid has a clear sense of Britain’s national interest. The development budget must be an investment in the future - for the developing world of course, but also for people in Britain."

On the role of the UK's funding procedures for humanitarian development projects in Pakistan, discussions were also held on the accountability methods of the UK Government to ensure that funds are correctly utilised by Pakistani institutions and that corruption is kept to a minimal. Issues of tax evasion in Pakistan were also discussed. The Secretary of State assured MWF that the British Government is aware of the corruption issues and that they are taking thorough action to ensure that British tax payers funds are well protected and well utilised.

“It is important that the UK government focuses on ensuring good governance, strengthening accountability and ensuring that the Pakistani government pursues its commitment on tax reforms. The Pakistani Diaspora has a strong presence here in the UK and has been very generous over the years sending hundreds of millions of pounds in remittance and foreign aid.

“Minhaj Welfare has been working on various relief and development programs in Pakistan since 1989 focusing on education, medical care and humanitarian efforts, “ he said.

In addition to the meeting, the Secretary of State for International Development (SSID) also met with volunteers, Minhaj-ul-Quran members from the local MQI centre, Minhaj Women League and Muslim Youth League.

She also had an interactive discussion on Pendle Community Radio (Awaz 103.1FM), a local community Radio, to express her views and thoughts on foreign aid and the impact it is having locally and internationally. Joining the Secretary of State was local MP of Pendle, Andrew Stephenson who thanked the Secretary for visiting Nelson and expressed his views on a very ‘productive meeting’.

Some to facts to remember